​I met John through tech in the early 90s and we quickly became friends. John was in military intelligence in the Army, in the advisory team to the 5th ARVN recon from 1969-1970 in Viet Nam. Through the years we began writing actual letters to each other. In one of those letters he said that he never had a good letter that began with Dear John… . That was my prompt to create the title poem, which eventually lead to the theme for the book.

Dear John-- is a collection of poems that investigate explore the multi-facets of love by using diverse points of view to reveal romantic love, loving friendships, and love that is complicated. The namesake poem for which this book was conceived, the final poem, “Dear John—,” is an epistolary poem in multiple stanzas ultimately on which the theme of this book is derived. “what happens between the notes // is the living.”

Let Widows Be Widows is an elegiac collection of poetry. Using diverse points of view, Widows illuminates our various states of loss, hope, love and mourning we experience with death. This book is not a lament but rather an exploration on how we overcome grief.

​The poems of Let Widows Be Widows take us to the tenuous threshold between life and absence.  In myriad ways, LeHew delivers the difficult news of the dissolution of relationships, of illness, suicide, terminal diagnoses, deaths both graceful and brutal: all so compassionately witnessed, they become in her poetic hands a litany, a meditation, a rant, a prayer. LeHew’s remarkable range of forms—from cento and sestina to haibun and sonnet—makes each poem an intricately crafted vessel, “radiant in the twilight,” holding us “at the border between the worlds.”
Terry Ehret, author of Lucky Break and Night Sky Journey
This work could easily have been titled Duende Moon, a phrase from a poem late in the collection, as LeHew is not petitioning a beloved muse but wrestling with the duende, which only appears when there’s the possibility of death. Here it’s not just a possibility, it’s best friends, former romantic rivals, soldiers, former enemies, birds and cats (especially cats) all headed for the hereafter. While Lorca knew nothing can ever bring consolation, these fierce poems reflect a life as an ongoing elegy, capturing moments with a true poet’s rare and authentic pathos.
​Paul E Nelson,
Founder of SPLAB and author of
A Time Before Slaughter/
Pig War: & Other SOngs of Cascadia 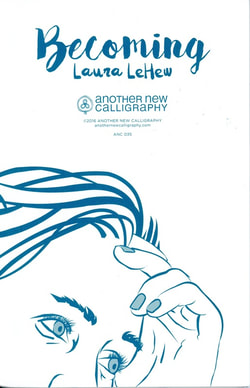 The last poem of this collection asserts that “…the past is the answer not/ worth pursuing.” But the startling and moving poems that precede it prove otherwise. In Becoming, Laura LeHew has pursued the past, delving into a family history replete with the catastrophic effects of alcoholism. Using innovative forms and vivid imagery, LeHew’s work poignantly evokes the devastation created by an alcoholic sister, mother, and father. These poems tell a powerful story—one both provocative and wrenching.


Rather than portraying family as the mythological unicorn we wish it to be, Becoming is the poetic equivalent of an antithetical Brady Bunch. Full of fracture, dementia, multi-generational substance abuse, and violence, Laura LeHew’s poems wrench family damage from shadows and whispers directly onto center stage. A poem in the voice of sister “Karen,” relates: “Once he fuckin’ broke the door down/pulled the phone off the wall/while I was callin’ the cops./Remember?//Like dad did that one time when he was so pissed at you?” Heartbreak, rather than sentimentality, is woven into the tightly crafted fabric of the verse, as well as the organization of the collection, with found journal-entry poems, non-sequential ordering, and this solemn profound couplet from penultimate poem “Mother’s Day”: “& the past is the answer not/worth pursuing.” As dark as the reality of Becoming is, the journey is redeemed by unflinching examination, moments of unwavering generosity, and the faithful testimony of survival.

Through finely crafted formal innovations and an unflinching focus on the realities of alcoholism, dementia, and the precarious pathways of family histories, Laura LeHew reminds us that poetry is one of the surest ways to fully inhabit our lives while grappling with realities that unsettle the mind and soul.

This book is hand made, limited edition and numbered. ​Order it here: Another New Calligraphy and I have some copies for sale.

Please read a review of Becoming on Whisper Thunder by Dr. Dawn Karima.

“Albert Einstein once said pure mathematics is, in its way, the poetry of logical ideas. The elegant poems in Willingly Would I Burn possess such purity, such poetic expressions of logical ideas. These poems blend math and science, presenting poems as word problems for the complicated mes we live in. The grace and strength of Laura LeHew's voice vibrate from every single page."
—Roxane Gay, Co-Editor, PANK

In this exciting new collection, Laura LeHew gives us poems of the most adventurous kind. Re-purposing the skeletal language and visual constructs of science and math, of computers and banking and even of standardized testing—utilizing, as well, both conventional and invented poetic forms—LeHew's philosophical algorithms are at once both personal and universal:  poems of witness and social awareness, of love and loss, of happiness and its limits, of family dysfunction, health care, and a wide range of social ills that stem from the “arrogant discourse” of those in charge. Willingly Will I Burn expands my horizons and gives me heart.
—Ingrid Wendt, author of Evensong

In Willingly Will I Burn, Laura LeHew reveals the emotion and humor that threads through the details of everyday life. She achieves this partly through her brave honesty, and partly by inserting poetry into forms that no one else has ever attempted, from math word problems to org charts to airplane reservation emails to retirement account statements. In Laura LeHew's world, poetry appears foremost in the most surprising places.
—Zack Rogow, author of My Mother and the Ceiling Dancers

Nominated for the Oregon Book Award 2014.

It's Always Night, It Always Rains 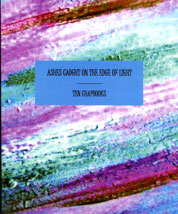 In the anthology Ashes Caught on the Edge of Light: Ten Chapbooks.

BP (Before Poetry) there was my murder mystery novel. Returning to my first love, this is my chapbook of murder/noir poems.

Order It's Always Night, It Always Rains in the Uttered Chaos on-line store - by Other Publishers​​

In its 3rd printing. A selection of fairy tales.

From here on down is in progress and has not been updated for a longish while - please bear with me while I update the sections below.